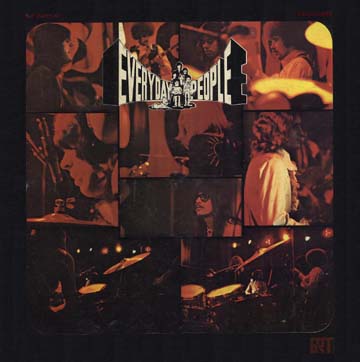 After "The Stitch In Tyme" disbanded, Bruce Wheaton went to Truro N.S. in the spring of 1969, for a short stint with the band "SOMA", playing congas, and singing background vocals. Bruce wanted to resume playing guitar and singing his own songs which he had been writing, so he returned toToronto and formed his own band "EVERYDAY PEOPLE" with fellow maritimers Pam Marsh (East Gate Sanctuary) and Carson Richards along with Chris Papputts (The New Breed) from Greece via Toronto, Al Muggeridge (Cathedral) from Barrie, Ontario and Dave Hare (The Sparrow) from Oshawa, Ontario. Bruce took the name from the band "Sly And The Family Stone's" song of the same name. Everyday People was ready to go by the summer of 1970.

The band recorded a demo which Bruce took to Toronto Sound Studios owners Terry Brown and Doug Riley who liked the tape and immediately signed the band to a recording contract. The band was signed to GRT Records Canada and later to Paramount Records in the United States. Wheaton's "You Make Me Wonder" was the first single and was a hit across the country, while the flip side "Nova Scotia Home Blues" was played extensively in the Maritimes. Their self-titled debut album was released in 1971 consisting of original songs and a cover of Sly And The Family Stone's "Everyday People". Several singles were released over the next few years.

Bruce Wheaton's song "I Like What I like" was an underground hit in discos throughout the world, and was recorded by several other bands including "Mr. Creeps" from England, and "LTG Exchange" from the USA. "Three Dog Night" and "Tom Jones" expressed interest in the song in 1973. "Mama Cass" who was performing the song in her live shows, recorded the song on her album/CD "Don't Call Me Mama Anymore". The album "Everyday People" was reviewed in "Rolling Stone" and "Creem" magazine called the song "The hottest dance tune to come along in five years".

"Everyday People" appeared on Kenny Roger's TV show "Rollin' On The River" and on "Musical Friends" which was a TV show from Montreal. The band toured the country extensively, and played many sold out shows at The Gasworks and many other bars in Toronto. We had them standing on the tables, many nights at "The Gasworks" says Bruce. Everyday People's shows in the Maritime's were their most successful of all.

The band was together 4 years and disbanded in 1974. Bruce Wheaton and Carson Richards went on to form "Molly Oliver" in Halifax. Pam Marsh continued singing and has released a CD called "Dream Come True" in 2001. Chris Papputts joined "The British Are Coming" and "The Fun Guys" before joining "The Viletones" using the name Chris Hate. Dave Hare became an insurance broker and played in the duo "A Positive Outlook".

Written from info from Bruce Wheaton.

1971 I Get That Feeling/Experience of Love (GRT) 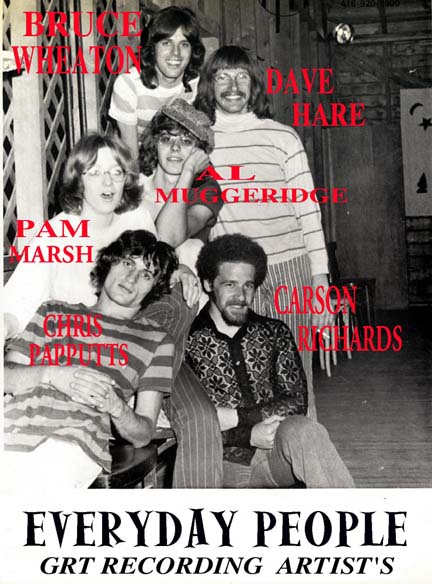